skip to main | skip to sidebar

Douglas Melini, It Flows Over Us Without Meaning, Minus Space, Brooklyn, New York, October 24-December 25, 2009 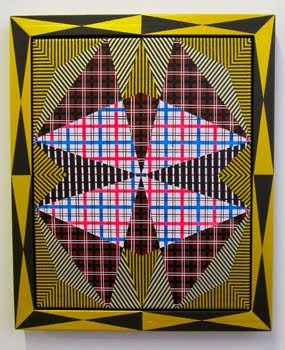 Matthew Deleget: Where did the paintings in your exhibition at MINUS SPACE begin?

Douglas Melini: Well, you were actually involved in the dawn of the new work. As you know during the summer of 2007, I had just finished preparing work for your exhibition Machine Learning and as fate would have it, my studio flooded, destroying close to a year’s worth of paintings, most of which were set for your exhibition. For me it was a pretty traumatic event. You know, it’s one of those things that can result in a number of outcomes. One can retreat and become very angry or negative, maybe even bitter over something like this, or one can engage with it and make sense of the situation, create meaning out of it. And for me, my studio practice is way too valuable to let this type of event take me in any direction other than forward.

For years I’ve been interested in folk arts and crafts, and it’s played a significant role in my painting practice in some form or another for the last 12 years. When I began to think about making new paintings after the flood, I began to consider the idea of a talisman and how it might function in relationship to painting. At the time I wasn’t quite sure how it would function, but I knew that I was headed in that direction. Shortly after I finished the earliest versions of the paintings, I visited a friend down in North Carolina in the Blue Ridge Mountains. I saw many barns in the countryside dotted with large geometric images and they actually looked close to the images that I was painting. Neither of us was sure exactly what these images on the barns represented, but I remembered the hex signs that the Pennsylvania Dutch had used as protective symbols for they’re barns and figured that they were being used in a similar way.

My studio practice has always been about letting personal events and experiences filter into my work in one way or another and I liked the idea of an abstract painting having talismanic powers. I know that the idea of a painting as a talisman may seem like a leap of faith or something, but making paintings requires a belief in something that’s not necessarily tangible. One has to have faith in the practice, a kind of focus or trust in the act of painting, hoping that it will all eventually lead somewhere. To be truthful things were happening in a very organic way and I was just trying to pay attention to everything. It all seemed to make sense to me. I guess that’s how the paintings for MINUS SPACE began.

Click here or the rest of this interview at Minus Space
Posted by q2222@earthlink.net at 3:49 PM